Why is the Magento Cloud so meh?

And perhaps even more importantly, is there hope for improvement? The short version of the answer is no, it really doesn’t look like it — not anytime in the next year or two, at the very least. But let’s start at the top, and ask the difficult questions that need to be asked.

It’s been over three years since the launch of Magento Cloud and, from the looks of it, not much has changed. In fact, given that they have called it a SaaS platform, the rest of us from the ‘built from the ground up SaaS world’ remain confused. In full disclosure, we are competitors to the so-called Magento Cloud. We deliver 2000+ stores in the public cloud, across all flavors of Magento, from small to mid-market businesses with a few million in revenue, to enterprises with billions. When a merchant chooses Magento, they can host anywhere they want, including with Webscale. When they are forced onto the Magento Cloud, through a number of tactics we’ll discuss in this blog, we (and merchants) lose out. But this is about way more than competition — it’s about fairness. It’s about respecting the community we work in, and about not shortchanging the merchants who pay us. It’s about transparency and genuinely supporting the front lines of ecommerce.

I’ll ask the questions now about the mystery that is the Magento Cloud.

How can a merchant say NO to free hosting?

Let me explain. Magento makes it ‘near’ impossible to say no to their proposal of free hosting included with their M2 Enterprise license. Whether you want an on-premise license or a fully hosted site, the pricing is the same. Great strategy (and anti-competitive if we may say so). The merchant gets one license proposal and that includes ‘free’ cloud hosting. In some cases, they do not know there is even a choice on hosting.

What you get is a restricted version of the customizable Magento platform you initially fell in love with, hosted on a predefined set of instances with specific functionality and behavior. No flexibility. No auto-scaling (unless you can plan for it and pay for it) and sub-standard support. What you really get is a three-year committed relationship with someone you do not love, and will not change.

What should have been teething problems are stretching far beyond infancy into adulthood, seemingly, with no end in terms of either time or variety? For something that started out as a massive vision of moving 30% of ecommerce into the Magento Cloud (and brilliantly so), it has fallen woefully short on execution — on way too many levels.

Here are a few online comments that caught our attention:

That was still like an overview of sorts, so let’s look in more detail into the “free” piggyback hosting. Whether you want it or not, it’s still yours. But you do have a choice, and these are important words to commit to memory:

Say no to Magento Cloud hosting! If the salesperson wants and values your business, they will have no choice but to give you an on-premise license. We don’t want to get into negotiation 101 but you know the drill. Free or not, you’ll end up paying in many other ways– heavily at that. Lost revenue, downtime, lost time, aggravation, frustration, wasted infrastructure, limited marketing options and so much more. We have enterprise customers, today, that have free Magento Cloud licenses, yet they still choose to keep their traffic with us. The ROI was just missing.

Sadly, the victims who have had to pay the price for the mess are two-fold. Let’s focus on the first set of people, those who bought into the vision and signed up to three-year licenses. They bought into the Magento vision because they have highly customized sites, and they love the flexibility that the Magento platform has given them to make their sites true to the expression of their brand. Over time, they have come to the painful realization that the SaaS/cloud vision that they bought into was half-baked. In reality, what they got was a cobbled-together solution of an extremely restricted version of Magento software, a third party CDN with its own edge strategy and APIs, multiple and constantly changing visibility tools such as Blackfire and New Relic, and a PaaS (platform-as-a-service) through platform.sh that has broader aspirations, and is not 100% dedicated to Magento. Platform.sh runs any platform of any flavor in a containerized, further restrictive environment with a single cloud provider. This platform is in no way multi-tenant, and has all of the security limitations inherent to lack of multi-tenancy.

The second group of people that have suffered — even more so than the ones who actually migrated to this ‘cloud’ — are the ones that were pushed so hard by the Magento sales team to get on to Magento Cloud, or else, that they broke. The fear of ‘or else’ unfortunately triggered a whole string of poor short-term and rushed decisions, such as replatforming off of Magento, or in some cases, shutting shop because the rushed replatforming was unaffordable at that stage. Roadkill, if you will.

Which brings us to the most important question. Who supports the customer using Magento Cloud?

The biggest challenge that people have reported after they’ve gone through pretty much an entire redesigning and replatforming exercise while moving to Magento Cloud is the absolute and total lack of support. Open tickets for weeks and months.

In fact, what we hear in public forums is when a customer opens a ticket, Magento support seem to try hard to take as long as possible to send it across all their partners, instead of actively working to resolve the issue. They hope it will just go away. It is a hot potato that can be handed off quickly, or it will just solve itself. In a way, we understand — they’re truly unable to solve tickets because they do not have complete control over their own cloud platform. They must rely on their platform vendor, their CDN vendor, the agency partner and their own software developers. They are a software company, and this global network infrastructure gig is not their expertise.

So, unless you have a partner (web agency) who is a competent Magento developer, and ideally an insider, you just won’t get access to any form of acceptable support. If you’re lucky, your agency may have a good understanding of Magento Cloud’s inner functioning, which means that there’s a chance that they can solve the problem by just building a little piece of code or plugin. But then you still end up paying for that custom piece of code, over and above what you’re already paying for your Magento Cloud experience. Lucky you.

The fact is: Magento Cloud support is never going to get better, unless the Magento platform is built from the ground up to be a true SaaS platform. Hold that thought.

There are rumors that Adobe is investing enough time and money, and directing multiple teams to rebuild the vision of Magento from the ground up as a true SaaS platform, but we all know that a project of this size cannot happen for another 12-24 months or more — so where does that leave merchants and their lost traffic?

How are merchants so comfortable trusting Magento with their entire business?

How do businesses have so much trust in Magento’s vision that they give them such unfettered access to everything: their checkouts; their revenue; their customer experience; their scaling; and their support? 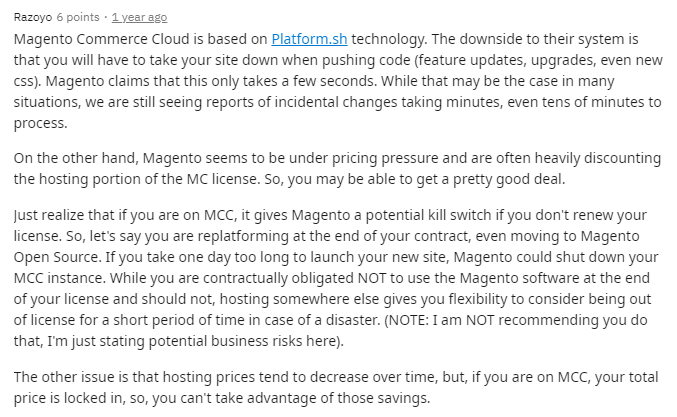 What’s to say that three years from now, Magento Cloud, once they have your revenue, backend, and checkouts captive, are not going to change their strategy or use their kill switch? Let’s face it — they are a public company and cannot subsidize the cloud solution forever. They have to make money off the platform at some point in the future. And the fully hosted merchant with their sites and their sales is a captive audience. Or a prisoner even.

Does anyone have options?

Merchants are the customers. They have the leverage. They have options and need to understand what to ask for. Ask for a quote just for the Magento’s license and hold your ground. Or look at the open source version of Magento. Or stay on M1 and consider multiple options for ongoing support.

Truth be told, Magento Cloud can work for certain businesses — ones that have relatively small sites, and don’t have several SKUs and complex deployments. Simple code really. Those customers can of course run on other SaaS platforms too. But if you’re planning on rapidly growing, expanding your product lines, or running promotions that will drive significant scaling events, and security is a corporate priority, you should stay on Magento, but look beyond Magento Cloud.

Know your rights – don’t make the move unless you’re clear about the benefits you stand to gain. Do your homework, and carefully analyze all your available options, because three years is a long time to spend backed into a corner.