Insights from 1604 ecommerce professionals on the evaluation of headless architectures

SANTA CLARA, CA – September 21, 2021 – Webscale, the Cloud Platform for Modern Commerce, today announced the release of the 2021 Global Headless Report, a first-of-its-kind review of the key drivers influencing merchants, and digital agencies, to transition their storefront infrastructure to a headless future. 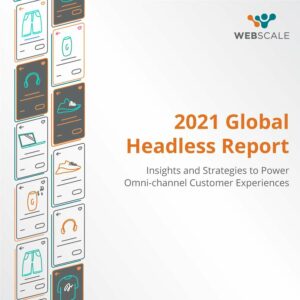 Headless architectures are breaking apart the dated, monolithic ecommerce applications that have impacted the user experience, especially on mobile platforms. With a headless approach, the user interface is decoupled from the back end ecommerce application, giving merchants the agility to provide new features and functions, as often as they need to, while maintaining stability at the origin.

With inputs from 1604 ecommerce professionals, including merchants and digital agencies, the report provides insights into their key concerns, technology preferences and critical business priorities while exploring a headless build for their storefronts.

Key insights from the report:

Improved performance also rated highly among the business reasons for going headless from merchants who had already made the transition. With the recent mandate from Google around Core Web Vitals, and with 90% of websites failing to meet its standards, risking a drop in search ranking, it’s likely this will continue to be a driving force for headless adoption.

“The real value of a headless strategy is in facilitating the front and back ends to evolve and scale at their own pace. A single back end can power any number, and type, of front ends, from a mobile PWA to an in-store kiosk, elevating and streamlining the user experience,” said Sonal Puri, CEO of Webscale. “This evolution in how merchants architect their storefronts is what we refer to as “modern commerce”, and the Webscale platform has been designed to deliver on its promise, enabling flawless user experiences on any ecommerce platform, in any cloud.”

Webscale offers tailor-made cloud delivery infrastructure designed around the needs of headless storefronts and PWAs. Customers also have access to the Webscale Portal that provides complete visibility, not only into traffic and security threats, but also into the real user metrics (RUM) data that merchants must monitor closely to understand how their storefront’s performance and availability are impacting the user experience across multiple devices.

Download your free copy of the 2021 Global Headless Report today, and to learn more about Webscale’s cloud platform for modern commerce that simplifies the delivery of headless infrastructure, go here or reach out to us at info@webscalenetworks.com