Today, it’s a well-known fact that you can lose hundreds of thousands of dollars (if not millions) in revenues for every hour your e-commerce site is down. And when you’re trying to exponentially grow sales through aggressive marketing campaigns, AI-powered recommendation engines, and social influencer-driven promotions, you have an airtight case to never risk downtime.

Maintaining 100% site availability is often a lot harder than most people think. And when it comes to e-commerce, Murphy’s law seems to, almost unfailingly, apply.

Anything that can go wrong will go wrong.

Just a couple months ago, brands like Walmart, J.Crew, Lululemon, Barneys New York, and Ulta Beauty struggled to handle the Cyber Weekend rush as they experienced downtime and site slowdowns. 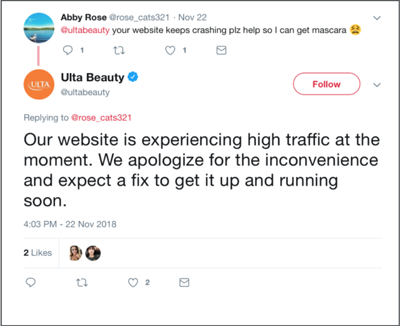 It would be simple to avoid downtime if sites went down for just one specific reason and you could address it. If only it was that easy!

Here’s a list of the top eight reasons why e-commerce sites crash:

In 2017, many websites hosted on AWS S3 went down due to a developer error. If it can happen at AWS, it can happen to your site too.

If your developer or site administrator was running a code update, and it crashed soon after, it’s likely because the code was buggy, and it wasn’t tested adequately before deployment. Website issues because a developer failed to test code in a staging environment or didn’t adhere to best practices for code deployment, are sadly all too common. (See our blog called “People Break Stuff!” for more on that.)

You can also run into code errors when you install site plugins or extensions to add better features or functionality to your site. This is also down to poor testing, or a failure to keep the plugins updated post-deployment. The plugins themselves could also be poorly developed and maintained by their creators, which, unfortunately, also happens frequently.

Sudden traffic surges constitute another very common reason for e-commerce site crashes. These traffic surges often occur during the holiday season as millions of shoppers visit your site to make a purchase. They can also happen if you’re running aggressive marketing promotions or discounts, or if an internet celebrity just posted about you on a popular social networking site!

Such traffic spikes can inundate your existing servers, which in the absence of auto-scaling capabilities, bring your shoppers’ site browsing experience to a crawl or worse, buckle under the load. Accurate demand forecasting in e-commerce is extremely challenging (and often impossible). If you’re under provisioned in terms of server capacity, your site will inevitably crash. And if you’re over provisioned, you’re paying for capacity that you don’t use.

A DDoS attack occurs when hackers try to maliciously bring down your online storefront by overwhelming it with traffic from numerous and varied sources. These attacks are disturbingly simple to execute.

DDoS attacks have been around for a long time, yet they still remain worryingly common, and are becoming increasingly devious and malicious. In fact, they are often used as smokescreens to mask more dangerous objectives – including network intrusions, malware infections, and credit card theft.

A ransomware attack occurs when a hacker hijacks your site, and holds it for ransom. These attacks have grown in both intent as well as intensity over the years, with targets becoming increasingly high-profile, and techniques becoming more sophisticated. While law enforcement personnel advise that you should never pay a ransom, most businesses are sorely tempted as hackers usually strike where and when you’re most vulnerable.

Malware attacks happen when cyber-criminals exploit known vulnerabilities to embed malicious code into your site. The goal is often identity or credit card theft, but some malware attacks are created to bring down entire sites or applications.

This can be highly frustrating because you have no control over the cause. Reasons may include server issues, natural disasters (that affect physical infrastructure), or even routine maintenance! In rare cases, an entire geo may go down, or in extremely rare cases, a whole cloud provider may go down.

While all major cloud service providers usually get their servers back up and running quite quickly, it can feel like an eternity, especially as you know hundreds or thousands of visitors are unable to access your site for some time. Lack of a highly available architecture and a multi-cloud disaster recovery plan can leave you vulnerable to these unfortunate events.

Your e-commerce site can crash if it outgrows its current hosting plan. Let’s say, you opted for a plan with a certain capacity when you started out, but then you either forgot to upgrade it, or you experienced sudden unexpected growth. Either way, your site will go down just as it’s starting to get more traffic, putting off all the new visitors you worked so hard to get in the first place.

Your domain comes with an expiration date. If you forget to renew it before its expiry, your site will just vanish, leaving your users clueless about where to go! As far as mistakes go, this can be classified as a cardinal sin.

Similarly, certificates that ensure trustworthy transactions over the Internet have an expiry date and if your organization fails to renew your site’s certificate on time, your site may become unreachable for your audience.

You might have done everything right, but you’re still dependent on your DNS provider staying up and routing Internet traffic to you. When Dyn went down in 2016, it rendered a lot of prominent sites like Netflix, Twitter, and others, inaccessible for hours.

Downtime is common in the world of e-commerce, but it doesn’t need to be. All of the issues highlighted above can be prevented to ensure 100% site uptime – all you need is the right hosting infrastructure partner to ensure a seamless, uninterrupted user experience from the front door to checkout. Fill out this form or drop us an email at sales@webscalenetworks.com to learn more. Anand Hariharan is the Vice President of Products at Webscale. He is a product management, marketing, and business development leader with significant success in growing cloud-based businesses across different industries and geographies.
← Next Post Previous Post →